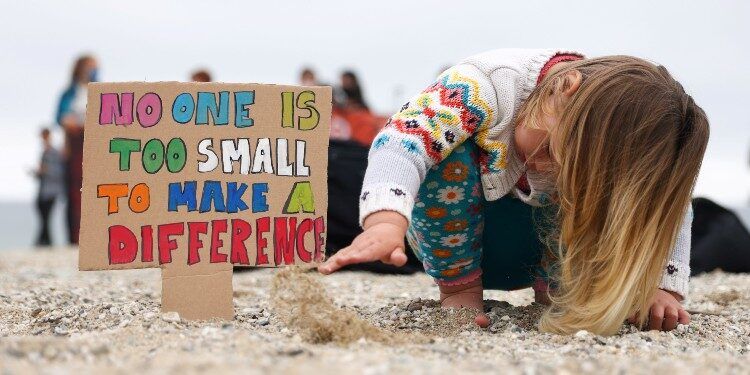 Another string of shootings (this time in in Buffalo, NY, and Uvalde, Texas) and with it the increasingly common lament, “Don’t send thoughts and prayers. We need policy and change.” Let me be clear: these are NOT mutually exclusive actions. And yes, mindfully selecting your thoughts and articulating them as a prayer requires action on your part.

You may be thinking, “How does this have anything to do with the Sacred Earth Ministry?” Well, read on, the parallel will become clear.

I do understand that, too often, “sending thoughts and prayers” is used as a reactionary response that has as much intention and sincerity as asking someone how they are doing as you pass them in the hall without ever waiting for an actual response.

If you have spent any time learning about the creative process as taught in Science of Mind and Spirit, then you hopefully realize that “thoughts and prayers” and “taking action” are two sides of the same coin (i.e., the creative process). We often use the aphorism, “Treat and move your feet.”

First: There is only One Mind (intelligence, consciousness). The infinite, primordial intelligence we refer to as “God’s mind” is not separate from “your mind.” That which you call “my mind” is that aspect (for lack of a better word) of the One Mind that you have identified with and are using.

Second: Every thing is first created in Mind.

Third: The creative process then works to bring that thought/idea which exists as infinite possibility into form… into actuality.

Fourth: To most effectively work with the creative process, we (as an expression—again, for lack of a better word) of that One Mind align completely with that thought-idea (which can be likened to a seed). This means we show up emotionally (energetically) as we would once that idea has come to full fruition and we “act as if.” That doesn’t mean we fake it, per say. Rather, it means we engage in the behaviors and action that are consistent and supportive of the idea we are bringing forth into the world.

To extend the planting metaphor, mindfully cultivating our thoughts into prayers (and intentions) is akin to selecting the right seed. It is first building in Mind the idea of the reality we want to see actualized. We then plant the seed-idea (i.e., release it to the creative process). During this time, we mindfully engage in numerous behaviors (in this analogy: watering, fertilizing, weeding, etc.) that support the unfolding/emergence of the seed-idea.

“Thoughts and prayers” and “action and behavior” are not mutually exclusive but rather mutually supportive and dependent. We need them both.

This brings me specifically to the Sacred Earth Ministry. The challenges we currently face with the environment perfectly reflects (i.e., are the harvest of) generations of a collectively held, predominate belief that the Earth and the natural world is separate and subservient to us. The Earth (and its various species) is just a big ol’ pile of natural resources there for whoever can lay claim to them in a drive to fuel capitalist profiteering and consumption.

In order to live in a harmonious, regenerative way with the rest of the natural world, we must alter our behavior and action in ways which support the belief in and prayers for that harmonious, regenerative world that we say we want to live in. IT TAKES BOTH. Whether we are talking environmental sustainability or public safety, we need thoughts and prayers that are brought forth into harvest via action and behavior.

Our approach in the Sacred Earth Ministry is to emphasize the “thoughts and prayers” because there are so many very good organizations that are already predominately focusing on the action and behavior. In fact, we maintain a list of action-oriented organizations at the end of this newsletter that, for the most part, have a local presence and I encourage you to lend your efforts to any of them that speak to you. Use the Sacred Earth Ministry for your internal work: to help remain centered and balanced; to get clear on your vision of a harmonious world in which the natural world thrives and is renewed; to feel inspired and hopeful. Then go out and do your work: water, fertilize, and weed your vision until it one day bursts forth in a glorious harvest.

Thoughts and Prayer. Behavior and Action. Two sides of the same coin.